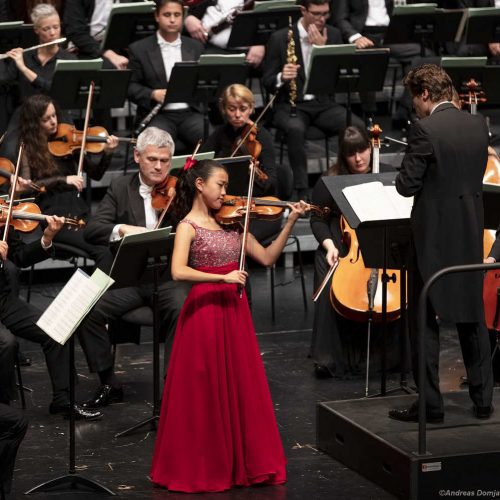 Clara Shen, a young German violinist, is quickly developing as an emerging concert artist of outstanding potential. Inspiring the audience with her natural musicality and virtuosity on big stages is her great passion.

January 2019 Clara performed as soloist at the opening concert of the World Economic Forum in Davos with the orchestra conducted by Marin Alsop. Clara has been invited to perform at numerous music festivals, including Gstaad Menuhin Festival und Rheingau Music Festival.

Her recent achievements include the 4th prize at the renowned Menuhin Competition in Geneva in 2018 and the 2nd prize at the 2017 China Zhuhai International Mozart Competition for Young Musicians. In addition, Clara Shen is a prize winner of the 17th International Violin Competition in Kloster Schöntal 2017. In 2019 Clara was awarded numerous special prizes, ia. the Manfred Grommek Prize of the Kronberg Academy and the Sponsorship Award of the HessenAgentur.

Already at the age of 10, Clara Shen took part as the youngest participant in the German National Competition “Jugend Musiziert” and received a first national prize with the highest score in the category duo (piano and a string instrument). In the following years, 2017, 2018 and 2019, she won further 1st national prizes with highest scores together with special prizes of Deutsche Stiftung Musikleben.

In 2016 at the age of 11, Clara Shen made her solo debut with the symphony orchestra of des Bavarian Philharmonie in the Herkulessaal in the Munich Residence. As a soloist she has performed with the Bad Reichenhaller Philharmonie, the Salzburg Chamber Soloists, the Symphony Orchestra Liechtenstein and the Orchester de Chambre de Genève. Despite her young age, she has played in large concert halls such as the Victoria Hall in Geneva, the Mozart Hall of the Zhuhai Grand Theater, China, the Great Hall of the Mozarteum in Salzburg, Fürst-von-Metternich-Saal in Castle Johannisberg Rheingau, the Laeiszhalle in Hamburg and Herkulessaal in the Munich Residence.

Born in Munich, she started learning the violin at the age of 5 with the violin pedagogues Simone and Peter Michielsen. Since 2014, Clara Shen has been studying as a young student at the University of Music and Performing Arts Munich, initially in the class of Prof. Sonja Korkeala and since 2019 in the class of Prof. Ingolf Turban. Additionally, she is also a student of Prof. Paul Roczek at the Pre-College of the University Mozarteum in Salzburg since 2016. Master classes with professors such as Ana Chumachenco, Ingolf Turban, Julia Fischer, Albrecht Breuninger and Lena Neudauer complemented her violin training.

Clara Shen currently performs on a violin made by Carlo Antonio Testore, Milan 1740, from the German Music Instrument Fund on generous loan from the Deutsche Stiftung Musikleben.

»…the technical requirements of the pieces are not revealed by her vile violin playing, but contribute decisively to Clara Shen’s musical substance. «